Do you believe in unicorns? Do you believe that Bill Clinton didn’t inhale, or that he didn’t have sexual relations with that woman (Monica Lewinsky)? If you answered yes to any of those three things, then by all means you should give Steve Stevens a call, and don’t hesitate to hand over your credit card number.

He’s one of the world’s most famous professional handicappers, starring in a nationally televised reality show on CNBC. Money Talks aired in 2013 and ran for two seasons, but shortly after the show’s debut, Steve Stevens’ real name and shady past was uncovered by Wagermind. It turns out that his real name is Darin Notaro, a convicted fraudster who spent time in jail for a telemarketing scam that targeted senior citizens. Bob Voulgaris, the legendary sharp NBA bettor, was critical of Steve Stevens on Twitter, referring to him as  “a complete scam artist” for making unreal claims.

One example of the type of unreal claims you can expect from Stevens (Notaro) was posted on his official Facebook page this weekend. He posted a photo of his employee (The Skipper) taking a selfie with a major league umpire. 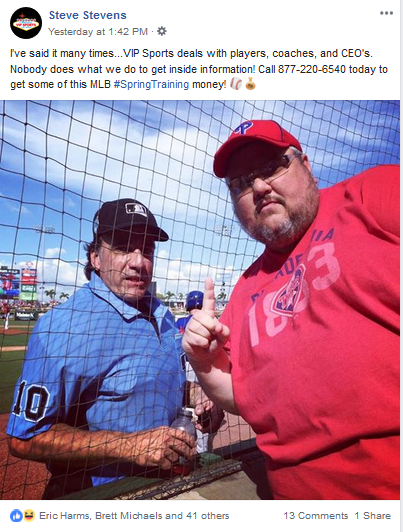 Here is the caption:

” I’ve said it many times…VIP Sports deals with players, coaches, and CEO’s. Nobody does what we do to get inside information! Call 877-220-6540 today to get some of this MLB #SpringTraining money! ⚾️💰“

This isn’t the first time a tout has made public claims of fixing MLB games. In 2012 one of Steve Stevens’ associates (Kris Barr) claimed to be “best friends” with Pirates pitcher Jeff Locke. He was trying to sell inside information on the games that Locke would start. This prompted an investigation, however MLB’s own investigators and organized-crime detectives from the NYPD eventually concluded that the claims were false.

If anyone actually took Steve Stevens seriously, he could get himself into some pretty serious trouble. It’s not easy to take him seriously though, as just 24 hours after posting the claim of paying off umpires, he posted a photo of a slot machine winning a $140,000 jackpot. The suggestion being that he won the jackpot while casually strolling through the casino after dining in one of the restaurants.

Of course it’s only a suggestion, and Stevens himself is strangely absent in the photo.

There will be a long list of guys cashing winning Lakers tickets this year, but how many of those guys also had the Raptors last year? Or the MVP winner in both the last two years? Or a perfect NBA Finals card in three of the last four years?

Should you pay for picks? Before answering this question, you need to be honest with yourself about what your expectations are. The fact is (and this isn't really a secret) that gambling isn't designed to be profitable for the player.

T. Noah on Sean Murphy
I love Murph’s free picks, and the fact that he always goes into great detail why he’s m…

Rob on John Martin
I don’t like sports touts, but this guy appears to be the real deal.